Walking across the roof of Europe

There’s a certain apprehension within the pilgrim community about walking through Switzerland. Some people are worried about the mountains and the challenging ascents they pose. Many are worried about the strength of the Swiss Franc and the dent that will be made to their wallets. But walking from the shores of Lake Geneva to the Grand Saint Bernard Pass, Switzerland’s frontier with Italy, I learned that everything you commit in breathless uphill steps and extra pennies (or, more accurately, pounds!) has its rewards.

I was spoilt with brilliant blue skies and sunshine as I walked my way around Lake Geneva, which were a delight in themselves but the perfect mountain views that came along with them were the real treat. I just couldn’t get enough of the Alps, I was mesmerised by them. And I was glad that the joggers, cyclists, and roller bladers I shared the promenade with were able to dodge me when, eyes focussed on the peaks instead of the path, I got in their way.

Leaving Lausanne behind, I followed the promontories and inlets of the shoreline. At every turn the water became more inviting, and I was taunted by picturesque off-shore diving platforms and stand up paddle boarders gliding into the distance. The countdown was on to getting the day’s walking done and going for a dip.

Steep climbs took me through charming villages into the heart of the Lavaux terraced vineyards. The vines date back to the 11th century when they were first cultivated by Benedictine and Cistercian monks. They are an extraordinary feat of engineering, covering every inch of the impossibly sheer mountainside, no corner of south-facing land being left bare. The landscape is truly stunning – a sea of vibrant green vines that tumble into the dazzling blue of Lake Geneva, before sinking into the depths of the shadows the Alps cast on the water. I found myself pausing to take a photo every five minutes, which also brought some momentary relief from the punishing inclines.

I managed to miss the once a generation winemakers festival, the Fête des Vignerons, in the pretty town of Vevey by only a couple of days. Which was probably a good thing. The streets showed the tell tale signs of weeks of heavy partying, which doesn’t tend to pair too well with walking. So instead of revelling I spent my afternoon soaking in Lake Geneva’s tepid waters, admiring Vevey’s “lake art”, marvelling at the shore front houses which appeared to be wearing hats, and bumping into Charlie Chaplin, who lived in the hills above the town for over 20 years. And, of course, I managed to sneak in a glass of the local vin blanc.

Charlie Chaplin was but one of many who made this corner of Switzerland their home. The beautiful Montreux Riviera has been a favourite amongst creatives for centuries – Jean Jacques Rousseau, Tchaikovsky, Tolstoy, Bryon, Ernest Hemingway, Graham Greene, David Bowie, and perhaps most famously, Freddie Mercury. Freddie said, “If you want peace of mind, come to Montreux”. And it was easy to see what he was getting at. The mountain views and quiet swimming coves, the 12th century Château de Chillion with its perfect lakeside setting, the paddle steamboats cruising along the water, and the promenade bursting with colourful flowers, sculptures, and opulent Belle Époque hotels. It’s the kind of place that you never want to leave.

But leave I must. After spending days looking at the Alps I had edged my way closer to them, and it was time to get in amongst them.

Trading sunshine for thunderstorms, I made my way up the Rhône Valley, which takes its name from the river that thunders through it. The mountains towered over me on both sides, their craggy peaks rising above the mist and cloud, dotted with lone chalets in the most isolated and improbable of places. I found myself rather taken by the Dents du Midi, a massif of seven peaks that dominates the skyline. By day I gazed at them in awe, and by night I Googled them and plotted a return visit where I would hike my way around them.

The town of Saint Maurice guards the entry to the upper reaches of the Rhône Valley, and is dominated by its abbey which has been a place of worship and perpetual prayer, and a sanctuary for pilgrims, for 1,500 years.

Torrential rain made for tricky walking, with slippery paths and land slides, and fallen trees to navigate over. There were days when I was soaked to the bone, and my route cruelly took me past train stations where my destination for the night was but one stop away. A ten minute train ride, or two more hours walking in the rain? Whether it was will power, or stubbornness, or stupidity, I kept walking. The rain may have dampened my spirits somewhat, as well as every item of my clothing, but it also made for some spectacular waterfalls. And my spirits were lifted when I received a good luck video message from the legendary long walker, Levison Wood.

I started to see signs for Verbier, Chamonix, and Mont Blanc. I was climbing higher. And then the signs for the Grand Saint Bernard Pass and Italy started to appear, which felt exciting and bizarre all at once. It was happening, I was crossing the Alps!

As I edged up the Ferret Valley the mountains became steeper and the settlements smaller. The tourists started to thin out, and it felt like it was just me, the vibrant green grass and the cows feeding on it. Swiss flags flew from picture perfect wooden chalets, and you got the impression that people lived here. Really lived here, not just in winter when the ski lifts were open.

After steadily gaining elevation over a number of days the time came to make a push for the Grand Saint Bernard Pass, which sits at 2,473 metres. As I climbed up and up the rivers became clearer, the wildflowers more abundant, and the forests thinner until I was above the tree line. I passed one or two isolated farmhouses in the four hour climb, but otherwise it was just me, the odd marmot fattening up before winter, and the views.

There’s something about being in the mountains. A serenity to be found in them. I stopped often on my way up to the pass, not because the going was tough or the air thin. But because I wanted to savour that serenity.

In 2018 two of my friends took their own lives, Troy and Jenny. They were both, in many ways, mountain people. Troy grew up in Denver, Colorado, in the heart of the Rocky Mountains. And Jenny spent many months living in the Alps, combining her talents of skiing and being a chef. I thought of them often as I edged towards the pass. And I was powered on by my resolve to raise awareness about mental health and money for the mental health charity Mind. Every time I stopped to admire the peaks and to savour the the serenity I found in them, I took an extra moment for each of Troy and Jenny.

I climbed higher and higher, until I was looking down on peaks that had only hours before towered over me. Then suddenly the top of the pass came into view, and with a burst of energy I raced towards it. I’d made it! I’d followed in the footsteps of the Celts, of the Romans, of Charlemagne, of Napoleon and his army of 40,000 men, and of countless pilgrims making their way to and from Rome.

In 1049 Saint Bernard, the patron saint of the Alps, founded a hospice at the top of the pass which served as a place of refuge for travellers who were frequently set upon by mountain brigands. During the harsh winters, with temperatures of -30 and snowfall 10 meters deep, the monks manning the hospice also took on the role of mountain rescuers. With the help of the Saint Bernard dogs, who they bred and trained, they saved the lives of countless people who got lost in blizzards or caught in bad weather.

Road access to the pass is closed from mid-October to late-May, yet the doors of the hospice are always open to anyone in need of refuge. The monks continue to provide hospitality to travellers, and I was joined by other pilgrims, hikers, and holiday makers spending a night in the historic outpost. The monks also continue to provide rescue services to those in trouble, and when trying to find a place to hang my walking boots and hiking poles I unearthed a cupboard full of skis and rescue sledges.

The Saint Bernard dogs are, however, retired and only patrol the mountainsides in summer to stretch their legs and to keep the tourists happy.

After the day trippers had left, and the flow of French, Dutch, and English traffic heading home from holidays in Italy had died down, the pass became a quiet and tranquil place. I sat for hours watching the clouds thin until there were none left and the sky turned pink. I marvelled at the mountains around me and the stillness of the lake, and tried to process the fact that I had arrived here on foot from my house in London. And that tomorrow, as I walked my way to the other side of the lake, I would cross into Italy.

Italy – the birthplace of my Mum and my maternal grandparents, my second home, and a huge part of my upbringing and heritage. It was a big reason why I had chosen to walk the Via Francigena, rather than any other trail. And, after eight weeks, it was in sight.

I’m walking from London to Rome to raise awareness about mental health and money for the mental health charity, Mind. You can read more here, and if you would like to make a donation please visit my fundraising site. Thank you.

One thought on “Lausanne to the Grand Saint Bernard Pass” 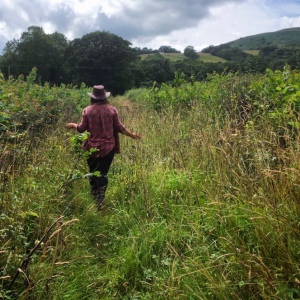